CRI provides advisory services to member-owned group captive insurance companies and other alternative risk facilities in the U.S. The company currently owns and occupies two Schaumburg properties at 201 East Commerce Drive and 55 East Commerce Drive. A consolidation of these two properties is planned and CRI will relocate all employees to the 1100 N. Arlington Heights Road property in the third quarter of 2017. The Schaumburg properties will be made available for sale leading up to the company’s relocation to Itasca.

According to George Rusu, the company’s Chairman and Chief Executive Officer, CRI will invest significant capital into the renovation of 1100 N. Arlington Heights Road in order to make it a world-class headquarters facility. Additional conferencing and training areas will be added, and the fitness and food facilities will be expanded. CRI will occupy approximately 100,000 square feet on the first four floors with third-party tenants occupying the remainder of the building.

Rusu added, “The 1100 N. Arlington Heights Road property presented an opportunity for Captive Resources to increase efficiencies with a consolidation, control growth, and also own a property at a very attractive operating cost relative to leasing.”

Captive Resources, LLC is an independent consulting company specializing in creating and overseeing the operations of alternative risk facilities including member-owned group captives, which today number thirty-one, with over 3,600 member companies and $1.9 billion in annual insurance premiums. 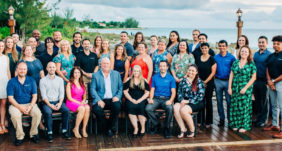