In the latest GCP Short from Global Captive Podcast, host Richard Cutcher was joined by Joseph Parrilli, Senior Vice President at Captive Resources, and Julie Antunes, Health & Wellness Coordinator at Abell, LLC,  to discuss medical stop loss group captives. Their conversation touched on a lot of important topics for medical stop loss and health benefits as a whole. Parrilli offered his perspective as a consultant to medical stop loss captives, and Antunes shared her experiences from the member side.

Below is a recap of a few highlights from the episode. You can listen to the full short on the Global Captive Podcast website.

On Why Abell Joined a Medical Stop Loss Captive

Antunes’ company, Abell, joined one of the medical stop loss group captives supported by Captive Resources back in 2011 and has had a self-funded health plan since 2006. Antunes explained some of the reasons why the company made that decision.

"Abell adopted a self-funded health plan back in 2006, and this was really in an effort to increase transparency and flexibility and mainly to manage claims expenses. As you know, in a fully insured model, employers pay a predetermined premium amount set by a carrier to cover annual claims expenses. When the actual cost of those claims incurred falls below that premium, of course, the carriers keep the difference. For self-funded plans, rather than paying a predetermined premium, these claims are paid as they actually occur. So, this impact on cash flow has been significant for us.”

On Being Able to Customize Health Plans

Antunes discussed the importance of being able to tailor health plans to meet the needs of Abell’s employees and how a group captive allows them to do just that.

“One of our biggest benefits of belonging to the captive has been the abundance of resources offered to us that have really led us to make very meaningful changes to our health plan. As a self-funded employer, we do have the ability to make impactful changes to our plan design, but with [a group captive], we are given specific resources through which to make those changes.

“Our employees are our most important customers, and we strive to offer a health benefits plan that is tailored to their needs, that is user-friendly, and of superior quality. Being part of [a group captive] helps us to do just that.”

On the Resources Available to Members

Antunes cited access to resources as a key benefit of being a member of a medical stop loss group captive.

“The resources that I talk about that are made available to us through [the captive] include vendors that offer solutions for cost containment, as well as shared experiences in networking among [other] members. Working with other members [has] introduced us to a vast network of resources that we never would have known about without being part of the captive. Through online forums and in-person workshops, members of the captive are able to engage in open discussions of the experiences and successes of fellow members.”

On the Difference Between Casualty and Health Captives

While medical stop loss and casualty group captives have similar structures, there are some key differences that Parrilli explained.

“[The medical stop loss structure] lines up very closely with what we've done on the casualty side related to safety. The members who decide to become an owner of [the captive] are deciding to come together with all of the other like-minded companies to try to figure out a way to control their total healthcare spend.

“Medical stop loss is different than casualty in the sense that about 80 percent of what a company spends are going to be those everyday claims. It's not the physical premium aspect that they pay out as a fixed cost on a monthly basis. So that is different than our casualty approach, and what that affords the members is the ability to learn from each other — coming together at workshops, board meetings, and on webinars [to] hear all of these different innovative approaches to controlling total healthcare spend.

“And when we ask the Member companies of these captives where they find the greatest value, it's not necessarily the risk-reward mechanism of the captive layer. They find great success, they find the reason they stay in the captive, is the ability to learn from each other.” 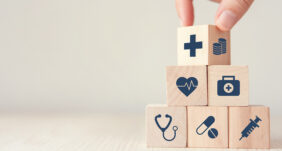 Blog
[Video]: How to Take Control of Your Company’s Health Care Costs